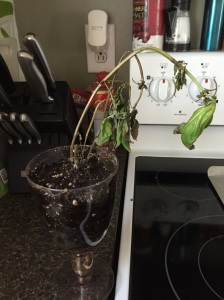 I don’t even know what happened so I’m going to re-trace my steps in an attempt to figure out how it all went wrong for poor Basil here.

I was going grocery shopping on that fine, Spring-deceptive day. (It has snowed twice since that day a week ago when it was 60 degrees and sunny. It also has been 70 degrees twice since then. I live in a weather blender.) I also had “plants” on my shopping list since (duh) it was Spring (for a minute) and something had… happened… to all my house plants over the winter. (I lower cased winter because I hate him.)

My lawyer advised I don’t go into specifics, but lets just say that plant tragedy has struck this household on more than one occasion.

Exhibit B- may they rest in peace.

Yeah, that’s the plant graveyard on my back porch. But here’s my excuse, see? The weather is crazy stupid here. It was summer one second–my plants were outside on the deck, growing wildly in the Ohio sunshine. It was a beautiful thing. And then next day it snowed and everything died. The end.

Okay, but it’s not the end. Because at Wal-mart that day, I bought plants. I bought little plants and medium plants (but no big plants because we don’t come from “big-plant money.” We are just middle-plant/small-plant money folks.) Then, while walking through the produce aisle, I spotted an end-cap of growing herbs. I LOVE herbs! I just hate paying for herbs… This seemed like a great compromise. I would buy the growing little pot of basil, I’d have basil to use more than once AND it would continue to grow so I would have more basil in the future. It was FOOLPROOF, I tell you! FOOLPROOF.

And then it died. The end.

No, not the end because I’m mad! I never even used my little basil plant! I re-potted the little thing into this weird wineglass thing I got at the thrift store. Is that why it died? Was that the wine glass someone used to drink poison? Was there residual arsenic in the glass from some schmuck committing suicide and it ended up killing my plant? Oh my poor plant! That’s what must have happened! It could not have possibly been anything I did in the least!

Yay! Nothing is my fault, just like always! Yay!

So as long as I don’t leave my darlings outside and don’t put them in ugly poison glasses, they should be fine!

I feel like I have life figured out now and nothing will ever go wrong again!

2 thoughts on “Murder Was the Case that They Gave Me”

Things I’ve gotten good at since I growed up

So, I was thinking the other day about my life and it’s ominous lack of achievements.  I’m nearly 28 for Christ’s sake (that’s right.  I age for no one but for the love of the Lamb… hah) and what exactly do I have to show for it besides a creative writing award given to me […]

Since I have recently (30 minutes ago) decided that charm is one of the most desirable qualities in a mate, a friend or a fuck buddy, I’m going to write a Valentine’s Day blog about charm.  I am, of course, considering myself to be highly qualified in the topic since I have charmed many a […]

Devon… Mother of the Devil

Well, Maddie is gone… Hank is at work, and I am left to my own devises (and a large supply of chocolate milk and goldfishes, which, if you haven’t heard, are SO delicious) so I’m going to write some crap… So I haven’t given you any parenting tips for awhile, and by parenting tips, I […]

*sigh* Ok, has anyone out there read The Secret by Rhonda Byrne?  My mom got it for me for Christmas and I was pretty excited to delve into the “secret to a happy life”. I don’t want to ruin it for anyone… so if you plan to read this, you should definitely avoid my comments […]

Is it just me, or do other people think they can make pretty much anything they sell now a days?  I hear myself saying an embarrassing number of times while in stores and shopping online, “Hell, I could make that…”.  I should just fork out the money instead of trying to make it myself because […]